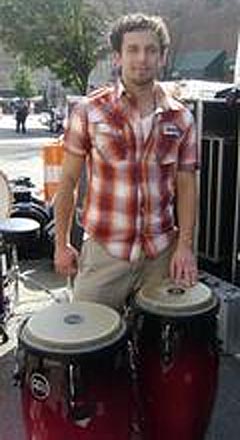 By night, Juan Rivera is a mild-mannered conga player and salsa dancer. By day, he’s an undercover crime fighter.

At least, that’s the role Rivera played Tuesday, when he helped to chase down a man who tried to rob a woman at an ATM machine in Courthouse Plaza.

Rivera, an employee in the county’s Commissioner of Revenue office, had just picked up sushi across the street from his office when he saw a man running and someone yelling “thief!” Dressed in a shirt and tie and still holding his to-go box of sushi, Rivera gave chase. Soon, he was joined by two other men, one of whom was calling police on his cell phone. The suspect, a tall, physically imposing man in his mid-20s, tried to flee into a nearby residential neighborhood.

“We went after him, he hid [behind] some houses, and I was like, hey he must be in one of these houses, because he just turned around the corner and disappeared,” Rivera recounted. “So we went looking and he was there. There was some verbal confrontation between him and the other person who was chasing him. Then he ran back into the houses, jumped a couple of fences to keep going, and we were right behind him and jumped a couple of fences, too. When he got to the last fence, which was really high, the police came from the left-hand side and caught him.”

So why did Rivera decide to chase after the man, ignoring the potential danger involved?

“To me, that’s just common sense. That’s just how i do things,” he said. “If someone gets robbed, to me, the people should react in a helpful manner. But there were only three of us that reacted. I didn’t go to tackle the guy… but at least participate in assisting this person who was just robbed.”

“It’s kind of sad to see how little participation there was,” Rivera continued. “I live in Columbia Heights in D.C., and if that would have happened there that guy would have not gotten farther than a block. People over there, they’re going to participate. The men there, if something happens to a woman, they just go.”

“Some kids might just do it for the fun of beating someone up,” he added with a laugh.

Once the suspect was in police custody, Rivera headed back to the office, slightly sweaty but with his sushi still in hand. He told his supervisor what happened, and was granted an extra 15 minutes to finish his lunch. Then, he got back to work. Yesterday afternoon, the victim — also a county employee — came and thanked him.

As it turns out, the suspect never got any of the victim’s cash. She was able to break free from the suspect’s choke hold, cancel the ATM transaction and yell for help, according to police. The suspect, identified as 26-year-old James Williams of no fixed address, has been charged with attempted robbery as well as grand larceny, from a previous warrant.

As for Rivera, he’s taking his five minutes of fame — which included an interview with NBC4 — in stride. After all, he’s already used to the spotlight, given that he plays the conga in two bands.

“It’s not a big deal to me,” he said of the new-found attention.