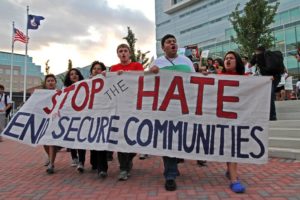 The forum was organized as a listening session by a volunteer task force charged with recommending changes to Secure Communities, which Arlington tried and failed to opt out of last year.

After a raucous hour of impassioned speeches, about 150 pro-immigrant demonstrators marched and chanted their way out of the building, declaring the forum an “absolute sham” and demanding that the task force resign. The walkout — and many of the speeches and chants that preceded it — was choreographed by the group CASA de Maryland, which has been speaking out against Secure Communities since its inception.

Armed with signs and slogans, group members helped to pack the auditorium at GMU to its 300 person capacity. Numerous speakers — including ministers, monks, attorneys, activists and County Board member Walter Tejada — told of Secure Communities’ alleged impacts, from the deportation of teenagers to the threatened deportation of accident victims. While it’s supposed to help track down undocumented perpetrators of serious crimes, Secure Communities is not working as the Obama Administration intended, immigrant advocates argued. 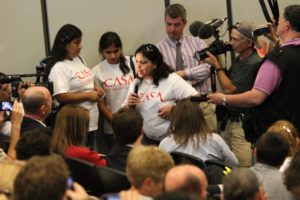 The demonstrators’ pivotal moment came when two undocumented mothers, facing deportation proceedings, confronted Marc Rapp, who had been inconspicuously sitting in the audience, observing the proceedings. Rapp, the Department of Homeland Security official in charge of overseeing the Secure Communities program, was told through an interpreter that one of the women, Maria Bolanos, was picked up after she called police during a fight with her domestic partner. She decried Secure Communities and asked to be reunited with her children, as Rapp listened quietly.

Shortly thereafter the CASA protesters filed out of the room, shouting “end it, don’t mend it.” After a noisy demonstration outside the building, they marched down Fairfax Drive and into nearby St. Charles Borromeo Catholic Church.

Back inside at GMU, the discussion continued. Several people spoke in favor of Secure Communities. With the protesters out of the building, there were fewer hisses and boos as they spoke of the need to make sure the country’s laws are followed.

“If you’re going to be an illegal immigrant in this country, the least you can do is not do crime and not get arrested,” said Columbia Pike resident John Antonelli. Other speakers suggested the 9/11 terror attacks could have been prevented by stricter immigration enforcement.

Ofelia Calderon, an immigration attorney who works in Virginia Square, “thanked” members of the task force for the extra business she’s been getting because of Secure Communities.

“You’re making me a lot of money,” she said. “Secure Communities is picking up everybody,” including immigrants charged with traffic tickets or being drunk in public, she said.

“I don’t see how Secure Communities is securing Arlington,” she said. “[It] isn’t working in the way you say it’s working.”

Others said that Secure Communities is making the country less safe by discouraging immigrants to provide information to the police.

Wednesday’s event was the last of four planned forums across the country. Task force members said that the forums in Dallas, Los Angeles and Chicago attracted similar anti-Secure Communities fervor. The task force is expected to generate a report on its findings for the Department of Homeland Security next month.