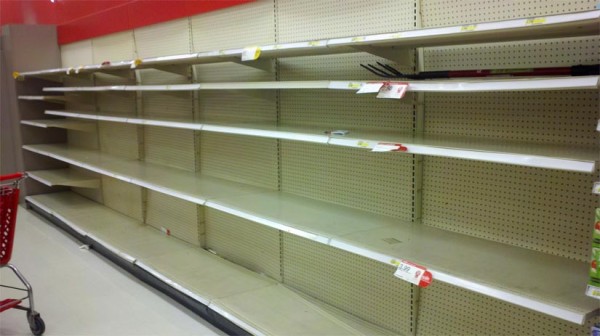 Storm Shopping Clears Shelves — Residents are taking the advice of emergency officials and shopping for essential items in advance of Hurricane Irene. At the Potomac Yard Target store last night, shopping carts were at a premium, milk was running low and bottled water was completely sold out.

Office of Emergency Management Video — Rest assured that Arlington County is ready for Hurricane Irene. But be a bit worried about the county’s ability to properly operate a video camera. [YouTube]

Fairfax Times Rips Off ARLnow.com Quote — The Washington Post-owned Fairfax Times has copied, verbatim, a quote from an ARLnow.com article on the 31st District state Senate primary without proper attribution. The quote from Betsy Wildhack only appeared on ARLnow.com — we were the only news outlet there at the time — but yet now appears at the end of a Fairfax Times article without any sort of credit or acknowledgement.