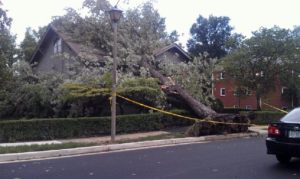 It was one of the most hyped storms in recent memory.

Switch on the TV last week, and it sounded like a disaster movie in the making. As it approached, evacuations were ordered on the coast and local residents stocked up on supplies. Then, as Hurricane Irene finally made its way up the eastern seaboard, local TV stations and the cable news channels went with wall-to-wall coverage.

No doubt you’ve already seen the damage reports and the damage photos. In your mind, was the storm’s impact worse than or not as bad as expected?