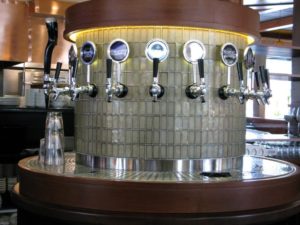 American Tap Room (3101 Wilson Blvd) is putting the finishing touches on its new Clarendon location in hopes of opening after the long holiday weekend. Today the restaurant is doing a trial run for friends and family, but ARLnow.com got a sneak peak.

Dozens of taps line the wall of the bar, which opens up into a large dining room. Beyond the dining area is a glass-enclosed martini bar. During warm seasons, patrons can head outside to the sizable patio and get toasty next to the three fire pits.

“We’re excited to be a part of the Clarendon community,” said Vice President of Marketing Wade Breaux. “We can’t wait to see everyone in a few days.”

Breaux says there’s not any one thing that will set apart American Tap Room from the many other restaurants in the area. Instead, he said, it’s more about the overall experience. He notes the welcoming atmosphere, more than 60 beers on tap, martini room, patio and moderate prices as some of the special features.

There are still some tweaks necessary before the expected opening on Tuesday, such as getting phone lines up and working. American Tap Room plans to hold a formal grand opening sometime in the next few weeks, when everything is running smoothly.

This is the company’s third American Tap Room location, in addition to locations in Reston and Bethesda.