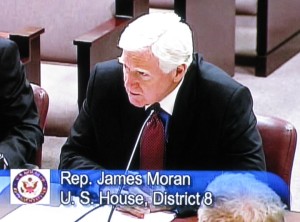 The lawmakers — Moran, Rep. Jerrold Nadler (D-N.Y.) and Rep. Hank Johnson (D-Ga.) — said the debt ceiling is “an unnecessary law increasingly used as an impediment to Congress’s ability to further economic recovery.” They will be discussing their bill, the Full Faith and Credit Act of 2011, at a press conference on Capitol Hill tomorrow morning.

In August, Moran voted against a compromise budget bill and decried the use of the debt ceiling as a lever that Republicans used to force it through Congress.

“The debt ceiling has been raised cleanly 39 times over the last 30 years, 18 times by President Reagan alone. But for the first time ever, a deal has had to be negotiated to raise the debt ceiling and prevent a default,” Moran said at the time. “Unfortunately, the proposal we are being asked to vote on would be bad for our country. It should be rejected, and President Obama should take matters into his own hands by invoking the 14th Amendment to raise the debt ceiling.”