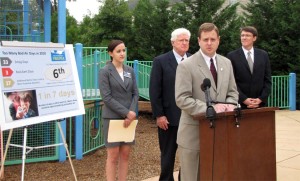 Northern Virginia and the rest of the D.C. region ranks as the 6th smoggiest metropolitan area in the country, according to a new report by the group Environment America.

Northern Virginia residents were exposed to “dangerous” levels of smog on 33 days last year, the report said. There were also “3 ‘red-alert’ days, when the air quality was so poor that anyone could experience adverse health effects,” according to a press release.

The report was released locally by Environment America offshoot Environment Virginia. Rep. Jim Moran and Del. Patrick Hope were among the speakers at a press conference yesterday at the Langston-Brown Community Center in Arlington.

Environmental Virginia spokeswoman Sarah Hyman said the report is troubling for local residents — particularly children and the elderly, who are a higher risk of adverse health effects from air pollution.

“Virginians deserve clean air. But on far too many days, people in the D.C. Metro area, including Northern Virginia, are exposed to dangerous smog pollution,” Hyman said. “For the sake of our children, we must make every day a safe day to breathe.”

Hyman went on to criticize the Obama administration’s decision to put off updating the Environmental Protection Agency’s national smog pollution standards until at least 2013.

“We must make every day a safe day to breathe,” Hyman said. “Unfortunately, rather than acting decisively to protect our kids from dangerous air pollution, President Obama chose to kick the can down the road. Virginia’s kids, senior citizens and those suffering from respiratory problems will suffer as a consequence and certainly deserve better.”

An American Lung Association study released in April said the D.C. area has the 14th worst smog levels in the country.

END_OF_DOCUMENT_TOKEN_TO_BE_REPLACED

More Stories
Moran to LGBT Youth: It Gets BetterWashington Blvd Bridge Work to Begin This Spring