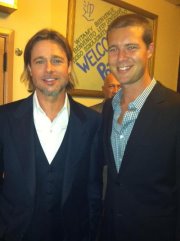 (Updated at 4:15 p.m.) Reed Thompson, 28, didn’t move to Los Angeles with the intention of becoming a Hollywood actor.

The one-time Arlingtonian says he moved there on something of a whim after graduating from the University of Texas, to avoid moving back in with his parents. Thompson was working for an investment firm, in fact, when he received a fateful phone call a while back, asking him to audition for a new movie about baseball. Fast forward to present day and Thompson now has a supporting role in a blockbuster movie — Moneyball, which opens in theaters today — playing the younger version of one of the biggest stars in the world, Brad Pitt.

The path from Arlington’s Country Club Hills neighborhood to the big screen might never have happened, Thompson says, if it wasn’t for one simple request from a friend that he almost turned down.

A photographer friend in L.A., who was building her photo portfolio, talked a reluctant, recently-graduated Thompson into doing a bit of modeling for her. Somehow, years later, one of those shots landed on the desk of a casting director at Sony Pictures, who called Reed and asked him to audition for a part in a movie starring Brad Pitt. After all, Reed — who moved to Arlington from Texas in middle school — is a dead ringer for a younger version of Brad Pitt, even though he insists he doesn’t personally see the resemblance. 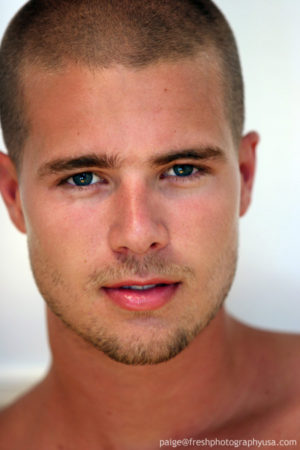 Thompson, a former student athlete at Gonzaga College High School in D.C., eventually made it though all the script readings, screen tests and baseball tryouts, and was cast in the movie. With no formal acting training, Reed embarked on an effort to learn the craft as quickly as he could.

“Since then I’ve been in class every week,” he said in a phone interview from Los Angeles last night. “I told myself, if I’m going to do this I might as well do it 110 percent and give it my all. It’s not as easy as you think it is… the people that you watch on television and the movies, they make it look really easy because they’re good at what they do.”

Luckily, Thompson had some help on set — advice from the film’s director, tips from fellow supporting actors and, of course, being able to watch Brad Pitt up close.

“I was able to watch a lot of the scenes anytime I wanted to go to the set,” Thompson said. “I was able to watch him and kind of say, okay, maybe I can try to mimic some of the stuff that he does in his scenes, whether it’s a face or a movement or anything like that.”

It helped, too, that one of the most famous people on the planet happened to be friendly and approachable.

“Brad is the nicest guy, super down to earth,” Thompson said. “He’s like one of your good friends. He’s not pretentious… he’s not a diva.”

“It’s surreal,” Thompson continued. “Someone who’s like that that’s in every magazine… to have him know who you are and to be on a first name basis, that’s amazing.”

With Moneyball opening across the country today, Thompson said he has been talked into watching his movie again, for the third time, in a public theater with a group of friends. He’s hoping not to get recognized.

“I don’t care about fame, I don’t want to be famous,” he said. “I’m not the Hollywood type, I don’t go out to the clubs, you’re not going to see me on TMZ — well, hopefully not.”

Although he’s now pursuing an acting career — “At this point I figured, why not?” — Thompson says he’s looking forward to coming back to visit his parents over Thanksgiving for the simple fact that it will keep him grounded in his Virginia roots.

“I have my family and my friends there, who are obviously going to do as much as they can to make sure that I don’t get too full of myself with this,” he said. “I don’t think that anything is going to change.”

Thompson now has a starring role in a forthcoming, independent film called Where Did You Sleep Last Night, and is looking for more work.

“I never really said that I wanted to get into the whole acting thing, but I was never opposed to it,” he mused. “I mean, who wouldn’t want to make a living that way?”