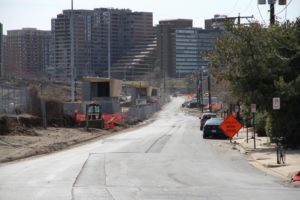 The Arlington County Board’s recent vote to change the name of Old Jefferson Davis Highway to “Long Bridge Park” was preceded by a thorough dissing of the former namesake by Board Chairman Chris Zimmerman, the Sun Gazette reports this morning.

“I have a problem with ‘Jefferson Davis,'” Zimmerman said of the former Confederate president. “I don’t believe Jefferson Davis has a historic connection to anything in Arlington… He wasn’t from Virginia. I don’t really see why we need to honor him.”

Though last week’s vote may be a victory for the anti-Jefferson Davis crowd, it only renames a narrow, pothole-ridden backroad that connects Crystal City with a future county park. The much larger and more heavily-traveled State Route 1 will continue to be known as Jefferson Davis Highway.

Though the Civil War figures prominently in the history of Arlington, should these roads be renamed for something or someone not associated with slavery and the losing side of a horribly costly war? Or should we preserve our history, warts and all?