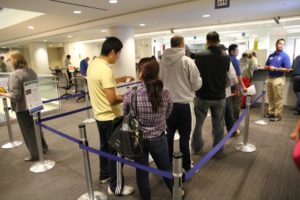 “Our tax party isn’t very popular any more,” Arlington County Treasurer Frank O’Leary said with a smile this afternoon, as residents trickled into the county government building in Courthouse (2100 Clarendon Blvd) to make last-minute tax payments. Thanks to a clockwork-like directing-and-collecting operation, some 25 county staffers strong, lines have remained relatively short on what is traditionally a very busy tax deadline day.

“A year ago, you would have had a sea of humanity here,” said O’Leary, who has served as Treasurer for 28 years. “So far, that’s not the case…. This is the lightest due date in my history.”

After handling about 1,600 in-person tax payments on Monday, and 1,800 payments on Tuesday, O’Leary guessed last night that his office would have to handle about 2,600 payments today. That, O’Leary says, now seems like an overestimation.

“The biggest story this year is there is no story,” he said. “We were surprised.”

“Ahh, it’s not like the old days,” one Treasurer’s office employee was overheard saying to a colleague.

O’Leary credited the work of employees from the Treasurers office and the Commissioner of Revenue’s office for keeping things moving. He also said that “alternative” payment methods he’s worked to put in place over the years — from online tax payments to instituting tax payments at banks — have also helped.

The biggest change from past years O’Leary has noticed is that immigrants — who make up the overwhelming majority of in-person taxpayers on the due date — aren’t here in the numbers of previous years.

Tax payment stations — including the usual Treasurers counter on the second floor and an “express” area set up on the first floor — will remain open until 5:00 tonight. 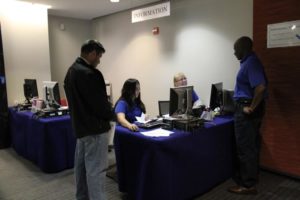 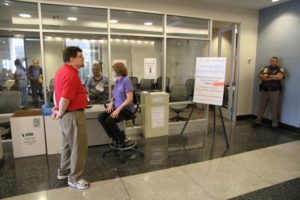