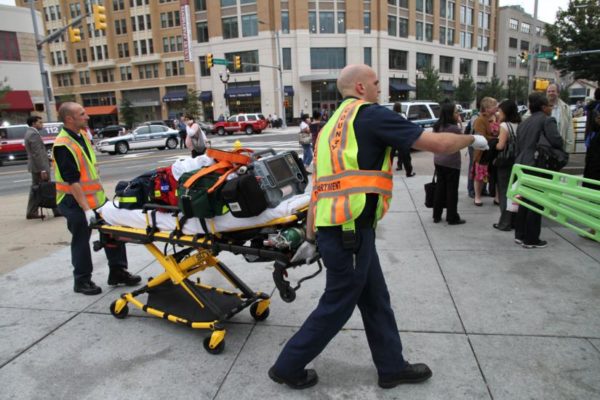 (Updated at 6:30 p.m.) A person has been hit by a train at the Clarendon Metro Station.

Emergency vehicles have surrounded the station, shutting down N. Highland Street and partially blocking Clarendon and Wilson Boulevards. Public access to the station has been cut off.

Technical rescue crews from the fire department and from Metro managed to free the victim, who was reported to be trapped under the train. The victim has been rushed to a local hospital via ambulance.

Riders on the striking train were not able to exit the train until 6:15 p.m., almost 75 minutes after the victim was struck. A woman who had a minor medical emergency while on the striking train was earlier taken to an ambulance via stretcher. The remaining passengers are now walking out of the station. Many are heading on foot to their destinations further up the Orange Line.

Firefighters were preparing to distribute water to those passengers at the end of the platform, according to riders. While the air in the trains was described as hot and stale, riders we spoke to said no one panicked.

“It was very cordial,” one man said.

Metro riders have reported significant delays throughout the Orange Line. Shuttle service has been requested between Rosslyn and Ballston, according to Metro. Very crowded conditions have been reported at the Rosslyn Metro station. Arlington County police have responded to the station to assist passengers, according to department spokeswoman Det. Crystal Nosal.

Update at 7:20 p.m. — Orange Line trains are now running on both tracks through the Clarendon Metro station, according to WMATA.

Update at 8:25 p.m. — The following photos were taken shortly after emergency responders arrived at the station.