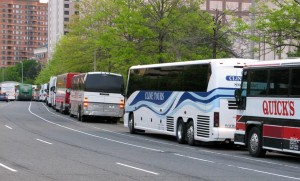 The tourism industry is on the rise in Arlington.

According to new state tourism figures, visitors spent nearly $2.5 billion in Arlington in 2010, an increase of more than 6 percent compared to 2009. Tourism revenue was still down slightly from its peak in 2008.

Tourism was responsible for 23,164 jobs and a total payroll of $790 million in Arlington in 2010, according to the Virginia Tourism Corporation. The county collected some $72 million in tax receipts as a result of tourism, and the state collected $81 million from Arlington tourists.

Arlington remained the top destination for tourists in Virginia, responsible for 13 percent of overall tourism-related spending in the Commonwealth.

“We’re happy to see such healthy increases in guest spending and tourism payrolls, especially in light of ongoing economic challenges,” said Emily Cassell, director of the Arlington Convention and Visitors Service, in a statement. “Huge credit goes to Arlington’s hospitality businesses — 43 hotels and hundreds of stores, restaurants and service providers committed to offering an excellent visitor experience at every opportunity.”