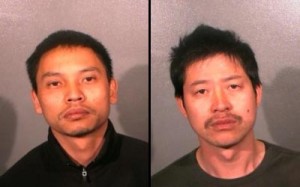 Arlington County police have arrested two men in connection with a string of biofuel thefts.

Police say the thefts started in March 2011. Used cooking oil that was awaiting collection was stolen from at least four restaurants, police say.

“The waste cooking oil from restaurants is converted into clean burning biodiesel fuel,” police sad in a statement. “Biodiesel is an alternative to petroleum diesel that can be used in any diesel engine. Typically these oil thieves steal from restaurants and no one notices until the normal collection company arrives to pick up the product.”

“Theft has become a major issue in the restaurant cooking oil collections industry, due to the increase of its value from the evolving biodiesel market,” the statement continued. “Police departments in the region are becoming more involved to remedy this problem.”

Police say they arrested 36-year-old Fa De Zheng of Oxon Hill, Md. and 38-year-old Ming Gang Lu of New York City on Friday, Oct. 7, as they were attempting to siphon oil from a deposit at Ballston Common Mall. The pair is charged with Grand Larceny, Grand Larceny with the Intent to Sell, Possession of Burglarious Tools and Destruction of Property.

Anyone with additional information about the case is asked to call Det. Paul Marseilles at 703-228-4237 or email [email protected].