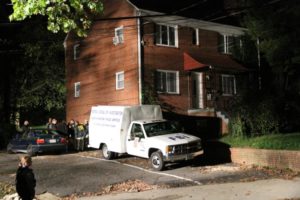 Update at 3:55 p.m. — Police have announced that an arrest has been made in connection with the FBI raid. As a result, we’ve removed a now-irrelevant reference to the owner of the group house that was raided.

About a dozen FBI agents executed a search warrant on a house in Cherrydale last night.

A neighbor said the house, located on the 4000 block of 17th Street N., was a group home, divided into several apartments. He said he hasn’t noticed anything suspicious about any of its residents. 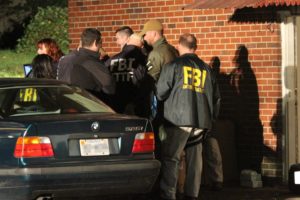 Agents appeared to be focused on the home’s basement area. They could also be seen searching the yard with flashlights.

FBI agents were assisted by Arlington County Police and the Arlington County Bomb Squad. The county’s bomb squad truck helped to provide light at the scene. It’s unclear if bomb squad members were utilized for any other part of the operation. Godwin said the scene posed no danger to the public.

In a somewhat unusual move, police officers stopped at least two individuals who were taking photos of the scene and demanded their name, address and date of birth.

The search warrant comes one week after an FBI Evidence Response Team conducted a search of a site near I-66 and Patrick Henry Drive, following the discovery of gun parts buried in the ground in a wooded area.