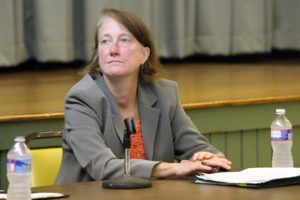 Last week we asked the three candidates for Arlington County Board to write a sub-750 word essay on why the county’s residents should vote for them on Tuesday, Nov. 8. Two County Board seats are up for election this year.

Here is the unedited response from Audrey Clement (G):

I’m long time resident of Arlington County with a Ph.D. in Political Science. I served as a congressional fellow in the 100th Congress, serving the House Subcommittee on Select Education.  I’m also an environmental activist. As treasurer of the Arlington Coalition for Sensible Transportation, I fought the I-66 Spot Improvement Project as a waste of taxpayer funds, suing instead for an environmental assessment to study alternatives to widening I-66 piecemeal.

I am an officer of both the national and state Green parties. As treasurer of the Arlington Green Party, I participated in campaigns in 2008 and 2009 to consolidate Arlington’s housing programs to leverage more money for affordable housing by placing a countywide housing agency referendum on the ballot. The referendum garnered more than 30 percent of the vote in 2008, but County Board defeated a similar referendum in 2009 by lobbying the state legislature to impose draconian signature requirements on petitions to place future referendums on the ballot.

I’ve also participated in campaigns to create a year round homeless shelter and ban plastic bags in supermarkets and chain drug stores and Styrofoam in food retail outlets. These initiatives are opposed by County Board.

I think Arlington needs a change in leadership because County Board is in bed with developers. As new office towers go up overnight, employers move into the county, spurring demand for housing that drives up rents and real estate assessments and promotes excessive infill development. Nevertheless County Board continues to award developers with more density—50% more in Crystal City alone. Over the past decade the supply of affordable housing in this county has been cut in half, from 24,000 in 2000 to less than 12,000 today.

My opponents Walter Tejada and Mary Hynes call the gentrification of Arlington County “Smart Growth.”  But I ask you, what is smart about recycling moderate income tenants out of the county? What is smart about saddling taxpayers with expensive, risky, debt ridden, vanity projects like the $6.7 million Artisphere, the $130 million Columbia Pike Trolley, and the $65 million Long Bridge Park Aquatic Center–while the county’s infrastructure crumbles? Walter and Mary argue that county homeowners have the lowest tax rate in Northern Va. Yet the Arlington County Civic Federation reports that the County Manager has cooked the books, and county residents actually have the highest tax and fee burden in Northern Va.

Walter and Mary will tell you that Arlington’s growth is “green” and sustainable. The only thing green about it is the dollars that developers pocket. Nearly all indicators of environmental quality in Arlington—energy use, traffic congestion, recycling rates, tree canopy, green space–are trending down. Our county’s recycling rate is no better than the statewide average, a dismal 40 percent, well below the City of Falls Church’s 58 percent. The school system can’t keep up with enrollments; streets need repaving; and the Metro system is packed during rush hour.

If elected I pledge to: