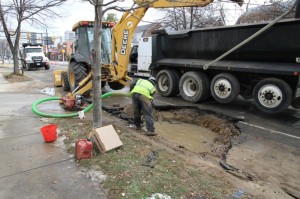 Update at 3:20 p.m. — The county has removed the video. The video was not supposed to have been made public yet, says Department of Environmental Services spokeswoman Myllisa Kennedy.

The Department of Environmental Services may be Arlington County government’s largest single department.

With about 375 full-time employees and an operating budget of more than $70 million, the department is in charge of maintaining the county’s streets, street signs, street lights, water lines, and sewers. It also collects your trash and leaves, runs the county’s snow plows and operates transit programs.

A new video (above) from Arlington County explores the many ways DES is a part of our every day lives.

The video contains a number of staggering facts about the infrastructure within our 26 square mile county, the smallest self-governing county — geographically — in the United States.

For instance, Arlington maintains 961 lane miles of roads, some 100,000 traffic signs, 526 miles of water lines, and enough sanitary sewer lines to stretch from here to Boston, Mass. Also featured in the video: a new remote-controlled camera that searches sewer lines for pipes that have broken due to tree roots and other factors.