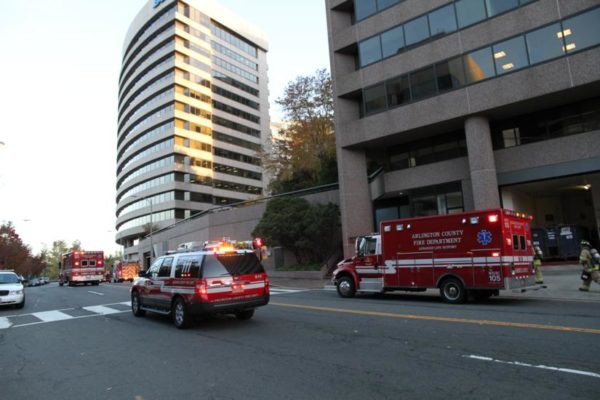 Update at 5:45 p.m. — Firefighters have determined the object is not explosive nor a hazardous material, police tell ARLnow.com. The incident is “winding down” as authorities complete their investigation.

Earlier: The block around the SAIC building at 200 12th Street S. in Crystal City has been shut down as police and firefighters investigate a suspicious package in the building.

The Arlington County bomb squad, hazmat team and traffic control officers are on the scene, on the northern end of Crystal City. Pentagon Police have restricted pedestrian access on 12th Street east of Route 1.

The building, which has been evacuated, contains a number of military-related offices. Initial reports suggest that a bomb-sniffing dog had a positive hit on a suspicious object inside the building.

No word yet on the type of object, but Arlington Police say it was mailed to the office.

Homeland security detectives from the Arlington County Police Department and agents from the FBI and the U.S. Department of Homeland Security’s Federal Protective Service agency are on the scene.