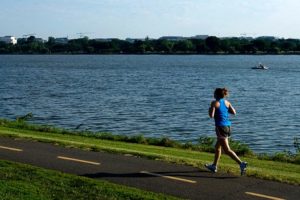 The frequency of attacks on female joggers is becoming increasingly worrisome for one prominent member of the local running community.

Kathy Dalby, founder of the race organizing arm of Pacers Running Stores, says she’s noticing what may be an upward trend in female joggers being subject to assaults, inappropriate touching and other such attacks. Just this morning a female jogger was “mugged” in Rosslyn near Route 50, according to Dalby.

“As a running store, we are getting concerned about the number of attacks on women runners in Arlington,” she said.

The last such attack happened on Sept. 29, when a 37-year-old woman was knocked to the ground, kicked and touched in a sexual manner on Army Navy Drive in the Arlington Ridge neighborhood.

Other reported incidents include a man who exposed himself to a female jogger on Oct. 26 and a man who grabbed and kissed a jogger on the Custis Trail on April 17.

Dalby suggested that female runners protect themselves by finding a running group or by taking extra precautions when running alone.

“We advocate running with a group and not wearing headphones if by yourself,” she said.