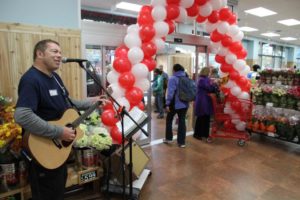 A crowd formed outside the store entrance at 1109 N. Highland Street this morning, awaiting the scheduled 8:00 opening. Following a brief “lei cutting” ceremony with County Board Vice-Chair Mary Hynes — which was held a bit early so as to not keep people waiting in the cold — shoppers flooded through the double doors and began christening the store with commerce.

‘Crew members,’ decked out in leis, the company’s signature Hawaiian shirts and — in one case — a turkey costume, enthusiastically greeted the first shoppers and began talking up the store’s wares.

“It’s never too early for cheesecake,” said one employee, who was handing out free samples. Hot cider samples, free leis and a reusable gift bag filled with treats were also handed out.

Hynes, meanwhile, used the opportunity to catch up on some shopping.

“I think it’s awesome… it’s great to have another grocery store choice,” she said. “People have been asking for a Trader Joe’s in our community for as long as I can remember.”

Trader Joe’s ‘captain’ (store manager) Perry Zettersten said employees will work hard to try to avoid the long check-out lines that plague the Trader Joe’s location in Foggy Bottom. The store has handheld “line buster” barcode scanners that crew members will be able to use to scan items while customers wait in line. Those customers will receive a receipt that they will then pay at the register. Still, Zettersten said the store’s popularity will make it hard to keep lines from forming.

The Clarendon Trader Joe’s store is about 12,300 square feet and will carry approximately 2,500 items at any given time. In the U.S., the typical grocery store carries 15,000 to 60,000 items and has a median store size of 46,000 square feet, according to the Food Marketing Institute.

All lanes of N. Glebe Road near Chain Bridge are reported to be blocked during this evening’s commute, due to a combination of a disabled vehicle and a large pothole….