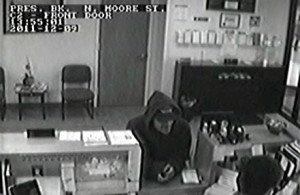 Arlington County Police have released a surveillance image of a man accused of robbing a bank in Rosslyn .

Police say the man walked into the Presidential Bank at 1700 N. Moore Street on Friday afternoon and demanded money from a teller. After receiving the cash, he fled on foot toward the Rosslyn Metro station. Officers arrived within a minute or two; they searched the station and the surrounding area but were unable to find the suspect.

The police department is now asking for the public’s help in identifying the man in the photo.

“The suspect is described as in his mid 20’s, White or Hispanic male, 5’5” to 5’6” with a thin build,” police said in a press release. “At the time of the robbery he wore a black hooded sweatshirt with red and white lettering, tan pants and light colored shoes.”