It’s no secret the one-year-old Artisphere in Rosslyn has vocal critics, who harp on the fact that the cultural venue has been bleeding taxpayer dollars while attracting a lower-than-expected audience. But supporters say the Artisphere still has promise, and needs more time to prove itself while a new business plan is implemented.

Artisphere Executive Director Jose Ortiz admits that errors have been made, but hopes that even Artisphere’s most ardent critics can place their focus on the future.

“We have all acknowledged we didn’t meet the unrealistic goals set in the original plan,” Ortiz said. “Not all of these ideas and thoughts were great and now we’re fine tuning that.”

One of the main goals supporters deem unrealistic was the thought that Artisphere would quickly make back the money invested in it, and then turn a profit. They say it’s now clear to everyone that’s not the way a business works. Ortiz believes the project simply needs more time. 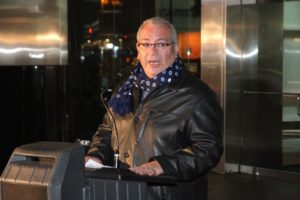 “Creating an urban art center of this magnitude is really an enormous task,” Ortiz said. “It’s unrealistic to think you’re going to open the doors and have success from the first day.

While addressing low attendance and revenue, Cassidy emphasizes that Artisphere was designed to be one piece in a larger puzzle of developments intended to give Rosslyn a boost. It was slated to open nearly simultaneously with several other large developments within walking distance, such as JBG’s CentralPlace project. However, a lagging economy delayed the nearby developments, and Artisphere had to bear the load of drawing people to the area on its own.

“Artisphere is here a bit ahead of those major developments that are going to bring thousands of people to Rosslyn,” Cassidy said. “Timing is everything. Who would have known the economy would be struggling as much as it is at this point in time?”

Ortiz said another problem is that Artisphere was sold differently to different people. He said it was being billed as an art place for everyone without specifying what that meant.

“People have different interpretations of what that means to them, so that certainly has created some confusion,” Ortiz said. “We have to help people understand our mission and core values of the business. Helping people understand that is helping to turn it around.” 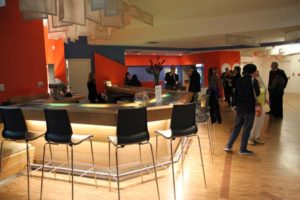 Artisphere has been given another chance, of sorts, in the form of the revamped business plan. Money-saving and money-making changes include closing Artisphere’s restaurant, opening later in the day, closing to the public on Monday and Tuesday and pushing for more private rentals of the space. Ortiz said the number of requests to use the space has been overwhelming, so offering more time for private rentals during the day should aid in generating revenue.

Arlington Arts Commission Chairwoman Gail Raiman said, “I know some of the challenges Artisphere faced financially were reported on, and this plan is a way to tackle those problems and make sure Artisphere has great financial stability and success.”

Critics point out that even under the new business plan, taxpayers are footing a bill of $2.3 million in financial year 2012. They aren’t convinced of the plan’s ability to turn around Artisphere, and hold to the idea that the project will continue losing money. Raiman wants those people to be open minded about the revamped efforts.

“Step back and take a bigger picture view and see where we can go with this new business plan, with everyone working cohesively together on its successs,” Raiman said.

While some opponents claim building the venue was a mistake in the first place, Ortiz disagrees. He said Artisphere is the most recent in a long history of artistic and cultural improvements in Arlington which add to quality of life. Cassidy echoed the sentiment, saying the county invests money in all of its neighborhoods to improve the community. She said while some neighborhoods receive money in the form of parks or recreation centers, Rosslyn’s funding was put toward Artisphere. She also believes the arts are important to the economic development of a community.

“Part of this revised business plan was a message sent by the county manager,” Cassidy said. “She has moved Artisphere to be within the Economic Development Department. That’s a strong message that arts can be an economic development driver.”

While the restructured business plan is cited as a change for the better, supporters are reluctant to consider it a silver bullet. Instead, it’s regarded as a decent start which should be tweaked and added to as necessary.

The hope is that eventually skeptics will give the venue another try, joining the increasing numbers of visitors to Artisphere.

Ortiz said, “I feel confident that with fine tuning, this is a great model that probably will be replicated in other cities, the concept of all of these different types of art under one roof.”