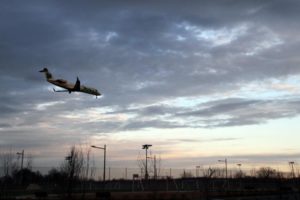 Arlington residents may get some much-desired relief from the noise of planes landing at night.

Earlier this year crews started nighttime rehabilitation work on the main runway at Reagan National Airport. That work directed planes landing after 11:00 p.m. to another runway, which in turn steered them over a larger portion of Arlington. Some frustrated residents have told ARLnow.com that since the construction started they have been woken up several times by loud, low-flying jets.

The late night runway change also steered planes heading in from the south over portions of southeast and southwest D.C. That prompted D.C. Delegate Eleanor Holmes Norton to send letters to the Federal Aviation Administration and the Metropolitan Washington Airports Authority last week, asking for an end to the redirected late night flights.

“Residents have continued calling [Holmes’] office, saying that they have experienced deafening, terrorizing noise and lights from planes flying directly over their homes in the dead of night,” the delegate’s office said, in a press release.

In response to the letter, the airports authority announced that it was scaling back the start of construction from 11:00 p.m. to 1:00 a.m., leaving the main runway open later. The change took effect last Friday. The main runway will continue to reopen at 6:00 a.m. following the overnight construction.

“This will significantly reduce the number of late-night flights using alternate flight patterns to reach the airport,” MWAA said.