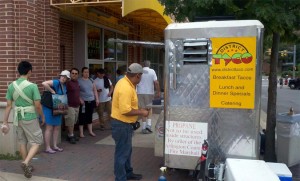 The new District Taco restaurant will be located at 1309 F Street NW, near Metro Center. It will be District Taco’s second brick-and-mortar location, after its popular Arlington location on Lee Highway. Owner Osiris Hoil tells ARLnow.com that he hopes to be able to open the D.C. eatery at some point this spring.

“El Torito should be back in the spring,” Hoil said.