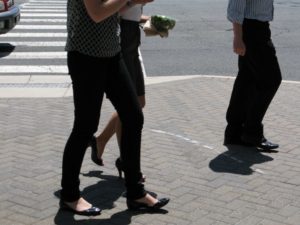 Clarendon is the area of Arlington that people most often target for walking, according to results from the recent Arlington County Commuter Services survey.

The 2011 ACCS WalkArlington Study gathered input from 985 respondents, and found that more than half walk daily throughout the community. 86% report making a trip entirely by walking at least twice a week.

The top reasons for walking include running errands and getting exercise. Commuting is another reason, with 56% of people saying they walk for at least part of their commute at least once a week.

In regards to safety, the county’s walkers aren’t overly concerned about crime, but worry about sharing the roads with vehicles. 54% say aggressive or inattentive drivers pose a safety threat to walkers.

WalkArlington is a county initiative aimed at getting people walking more for health, environmental and commuting benefits. 44% of survey respondents had heard of the initiative, but only 21% have used the organization’s services.

The survey found that two-thirds of respondents participated after seeing the request on ARLnow.com. Full survey results are available here.