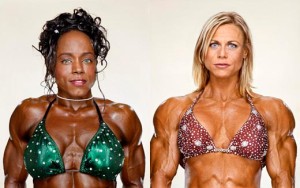 “She Got Game,” as the exhibit is being called, will hold its opening reception tomorrow night (Jan. 13) from 6:00 to 9:00 p.m. It will feature “painted murals, larger-than-life-sized photos, videos, and installations depict[ing] women in professional tennis, bodybuilding, cheerleading, and even competitive eating.”

“Some of these artists offer iconic images of strong women athletes; others use the trappings of sport as a framework for performances about competition, objectification, and popular culture,” AAC noted in a press release. “The show opens just a few months shy of the 40th anniversary for Title IX, the historic legislation that leveled the playing field for women athletes-increasing their participation in college athletics some 450% over four decades.”

“While completing a grueling three-hour CrossFit workout, [Swanson] will read every anonymous online comment she has ever received for her previous projects-including her controversial ‘Amber Doll Project,’ in which the artist commissioned the creation of a life-sized sex doll that resembled her exactly,” AAC said.