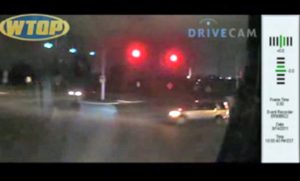 A video obtained by WTOP shows a Metrobus driver running a red light and nearly getting in a collision at the intersection of Columbia Pike and S. Joyce Street.

The bus is shown coming down the steep, curvy hill near the Air Force Memorial and driving right through the red light — even honking its horn as an SUV with the right-of-way drives in front of the bus’ path.

The video is one of several dozen obtained by WTOP through a public records request. Many of the videos depict collisions and near-collisions with vehicles and pedestrians, as recorded by a “Drivecam” video camera in the front of the bus.

The head of Metro’s bus operations told WTOP that the Metrobus system is safe when compared with other large bus systems across the country.