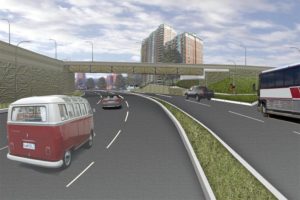 Various lane closures due to work on the new Courthouse interchange could cause some additional traffic headaches starting this weekend.

The Virginia Department of Transportation will be closing up to two of three lanes in each direction of Route 50 from 10th Street to N. Rhodes Street. Those closures will take place at night, from 9:00 p.m. to 5:30 a.m., starting on Sunday and running through Thursday, February 2. Daytime closures from 9:00 a.m. to 3:00 p.m. will begin on Monday and continue until Friday, February 3.

VDOT warns drivers that although late night closures don’t officially begin until 9:00 p.m., preparations for the road work could start as early as 7:00 p.m. Drivers should use extra caution in the area and be aware of construction crews.

The $39 million project to redesign the interchange at Route 50, Courthouse Road and 10th Street was launched to improve accessibility and safety in the area. Aesthetic improvements will also be added.

The project’s second phase of utility relocation is scheduled to be finished this spring. The entire project is slated to be completed in fall of 2013.