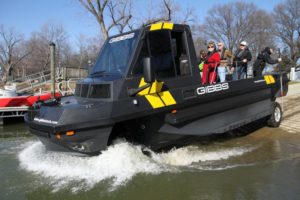 A company showed off the prototype of their new American-made amphibious vehicle at Columbia Island Marina this afternoon.

Michigan-based Gibbs Amphibians held the demonstration in the shadow of the Pentagon in hopes of convincing the military to place orders for their newest land/sea vehicle, dubbed the Phibian.

Company engineers say the Phibian is revolutionary for being able to travel at a high speed on land and on sea. The vehicle can reach up to 80 miles per hour on land, 45 miles per hour on the water, and can enter the water from land at a maximum speed of 30 miles per hour, we’re told. The 30-foot craft has a 7,000 lbs hauling capacity and can transport about a dozen people.

Phibian sports a carbon fiber hull, twin turbo 250 horsepower diesel engines, four wheel drive, and a patented, hydraulic suspension system that retracts the wheels above the water level when at sea (somewhat like landing gear on a plane). It’s the retractable wheels that allow better speed and maneuverability in the water, engineers said.

The Phibian will be produced in Michigan and will create 200 jobs, according to Gibbs. The company hopes to sell the Phibian to the military and to various federal and local government agencies for search and rescue and disaster relief operations.

Gibbs also manufacturers an amphibious sports car, which was on display today at the marina.