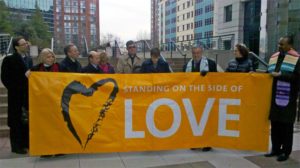 In a symbolic Valentine’s Day act, a gay couple submitted an application for a marriage license to the Arlington County Circuit Court Clerk’s office this morning — only to be denied because Virginia does not permit same-sex marriages.

James Fisher and Ron Bookbinder were joined outside the Arlington County courthouse by several dozen supporters of gay marriage, including County Board member Jay Fisette, Clerk of the Circuit Court Paul Ferguson, four local ministers and a local rabbi.

Following speeches and prayers outside, Fisher and Bookbinder went inside the courthouse to submit their marriage license application. Ferguson accepted the application but explained that state law prohibited him from issuing the license. He then promised to keep the application on file until gay marriage is legalized in Virginia, according to Elizabeth Wildhack, one of the event’s organizers.

The event was one of three such events in Virginia today planned by a group called People of Faith for Equality in Virginia. Religious leaders and their congregants were expected to witness several gay couples attempting to get married in Richmond and in Fairfax later in the day.

“These actions are part of a growing movement in Virginia to recognize the value of all families,” said Rev. Dr. Robin Gorsline, President of People of Faith for Equality in Virginia, in a statement.