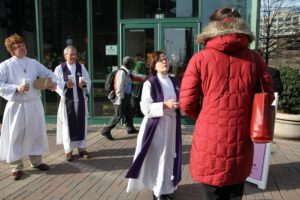 St. George’s Episcopal Church (915 N. Oakland Street) in Virginia Square is trying something new this year: bringing the ashes to the masses.

This morning, as commuters rushed off to work, ministers from St. George’s stood outside the Virginia Square Metro station placing ashes on the forehead of anyone interested in partaking in the solemn Ash Wednesday tradition, which usually takes place inside a church.

“Ashes to Go,” as the service was called, is an outreach initiative that has spread from churches in San Francisco and St. Louis to other cities across the country.

“‘Ashes to Go’ is about bringing church to the people: bringing spirit, belief, and belonging out from behind church doors, and into the places where we go every day,” the church said in a press release. “It’s a simple event with deep meaning, drawing on centuries of tradition and worship across denominations to provide a contemporary moment of grace.”

St. George’s will be back at the Metro station during tonight’s evening commute, offering the imposition of Ashes prior to the church’s 7:30 p.m. Ash Wednesday service.