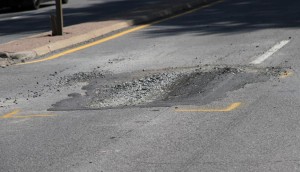 Thanks to the mild winter, the District of Columbia has reported a 22 percent drop in the number of complaints about potholes. After all, the warmer weather isn’t as conducive to pothole formation. Across the Potomac, however, Arlington’s pothole repairs crews have been busy.

Since the start of November, Arlington County has filled 2,184 potholes. That compares to 1,174 potholes filled by this time last year — an 86 percent increase. Why so many?

Department of Environmental Services spokeswoman Shannon Whalen McDaniel says the weather has allowed crews to get a head start on pothole repairs.

“The warmer weather has enabled crews to get out more frequently to repair the roads,” Whalen McDaniel said. “It’s helped us to get a jump start on the official pothole season that starts in early March.”

Residents can report potholes on the pothole page of the county’s website.