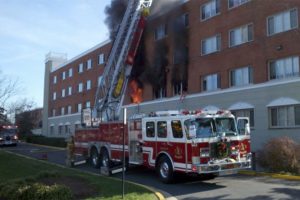 There were only three “large loss” fires in Arlington in Financial Year 2011, according to new figures out with the Arlington County Fire Department’s proposed FY 2013 budget.

“One is too many… [but] for us that’s a big milestone, a big accomplishment,” Fire Chief James Schwartz told ARLnow.com. Schwartz credited the community for good fire prevention practices and for quickly calling 911 whenever they see a fire. He also credited Arlington firefighters for fast response times and a high degree of firefighting competence.

Financial Year 2012 doesn’t end until the last day of June, but fire officials are projecting another good year for the department. The number of large loss fires is projected at 5, and average response time is projected at 4.1 minutes. Among the estimates for other types of calls handled by the fire department in FY 2012:

The proposed $49 million fire department budget for FY 2013 actually cuts funding to the department by 2 percent, but Schwartz says the decrease is due to specific program cuts and will not impact the number of firefighters on duty. The two biggest reductions in expense comes from a smaller firefighter recruiting class and the elimination of regional emergency medical program that Arlington operated under grant funding from the federal government.