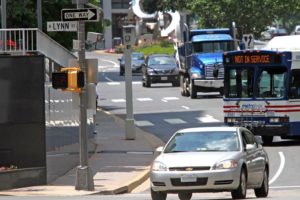 The additional cameras will cost the police department $438,102 during FY 2013, including $66,794 to hire a full-time employee to review each image captured by the camera to confirm that a violation took place. The remaining $371,308 will go to the contractor chosen to install and maintain the cameras.

The expenses are expected to be offset by the revenue generated by the cameras, estimated at $558,688 in the first year. Despite the expected profit, the police department is “very emphatic” that the red light camera program is about safety and not revenue, according to one official.

For Arlington, Fiscal Year 2013 starts on July 1. No word yet on when exactly the cameras would be installed, should the police department’s budget be approved as is.

Under Virginia law, Arlington is authorized to install red light cameras at up to 20 intersections.