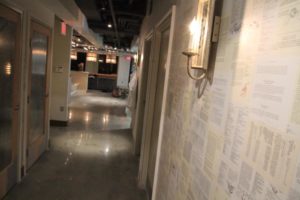 Green Pig Bistro (1025 N. Fillmore Street) in Clarendon has been hiring as of late, but they’re not looking to employ just anybody.

According to a Craigslist ad, the soon-to-open restaurant, which promises to serve “obscure” cuts of meat in the style of a rustic French bistro, is looking for “only those with serious food passion.”

“Don’t expect to find loins, micro greens and baby veg here,” the help wanted ad says. “Think sous vide. Think obscure cuts of meat in their finest form — food that is hearty, not heavy; sustainable and with proper technique above all.”

The ad continued: “Prior frustration with fine dining service is preferred.”

Chef/owner Scot Harlan, who used to work under celebrity chef Gordon Ramsay, told ARLnow.com last month that his biggest investment in the restaurant will be hiring good people in the kitchen.

In addition to line cooks, sous-chefs, and pastry-sous, the Craigslist ad also seeks hosts and servers.

“We will be employing an eSavvy staff and familiarity with iPhones, iPods, and iPads is a plus,” the ad says, noting that the restaurant will be using wireless iPads as the point of sale system (instead of traditional cash registers and/or credit card readers).