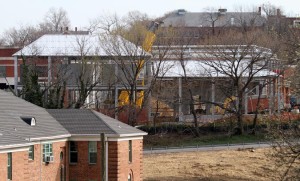 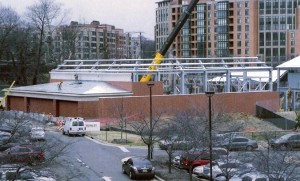 Ever wonder what the building being constructed across Route 50 from the Courthouse neighborhood is?

It’s a new Dominion power substation, and its part of a major electrical transmission project the company has been working on since the beginning of 2011.

Dominion says they’re making good progress on the project, which includes the substation — located on the grounds of Joint Base Myer-Henderson Hall — and a new 3.7 mile, 230,000 volt underground electrical transmission line. The company just wrapped up transmission line work along 10th Street between Wilson Boulevard in Clarendon and Route 50. It’s now working on the final phase of the project: running the remainder of the transmission line from the new substation to Marshall Drive and Route 110, near the Pentagon.

Work on the project is expected to be complete by the end of the year, according to Dominion spokeswoman Le-Ha Anderson. The new transmission line and substation will help support future growth in Arlington while improving the reliability of Dominion’s electrical service, according the company.