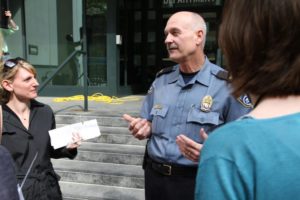 Scott says the memo, which he saw for the first time yesterday after television station WUSA 9 broke the story, was a “mistake” that has “embarrassed” rank and file police officers. A new memo Scott sent out this morning officially rescinds the March 1 memo, entitled “Proactivity Expectations 2012.”

“As a result of a news story, it became clear to me the public believed the memorandum was calling for traffic violation, parking violation and criminal arrest averages that could best be construed as ‘quotas,'” Scott wrote. “The Arlington County Police Department does not support a quota system with regard to enforcement efforts. Our officers are expected to perform their duties with the utmost professionalism and courtesy and even the insinuation that we are supporting a quota system… goes against the core values of this organization.” 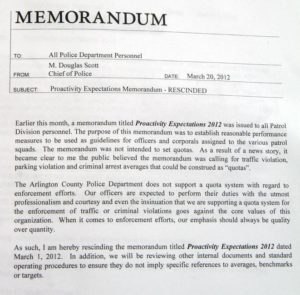 Scott says there would be no disciplinary action taken against the two patrol commanders who issued the memo. At a press conference in front of police headquarters in Courthouse this morning, Scott suggested that the memo was well-intentioned but sent the wrong message.

Scott added that the part of the original memo that discussed disciplinary action for officers who didn’t meet performance targets was a “mistake” and part of the reason he rescinded it.

Update at 1:45 p.m. — Arlington County has posted a video of this morning’s press conference, as seen below.