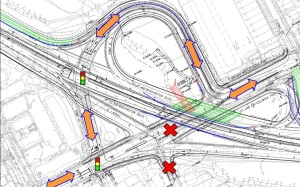 Get ready for major construction on a new Washington Boulevard/Columbia Pike interchange and bridge.

Starting this spring — as soon as final regulatory approvals are issued — crews will begin work on the first of eight construction phases that will stretch through August 2015. During that first phase, a detour will be constructed, using the north interchange ramps to provide a signalized, at-grade intersection on Washington Boulevard.

That detour is expected to be used for 3 to 5 weekends per year, starting this summer, when crews need to shut down Columbia Pike for demolition of the existing Washington Boulevard bridge and construction of a pair of new spans, just east of the existing bridge. The detour will also include facilities for pedestrians.

During the week and on weekends when the detour is not in place, the project contractor has promised to keep existing travel lanes and pedestrian access open during construction, with the possible exception of one eastbound lane of the Pike.

By next fall one of the new Washington Boulevard bridge spans should be in place. We’re told that bridge will be able to carry all four lanes of Washington Boulevard in a temporary configuration while the existing bridge is torn down and the second span is built in its place.

The VDOT-led construction project is budgeted at $51.5 million, which will be paid for primarily with federal and state funds.