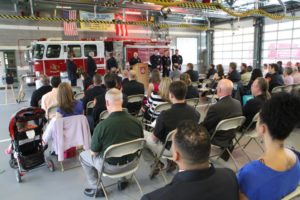 Arlington recognized some of its bravest paramedics and firefighters at an awards ceremony last week.

The 2012 annual Arlington County Fire Department Recognition and Awards Program was held Thursday morning at Fire Station No. 5 in Crystal City. Below banners recognizing the station’s role in responding to the Pentagon on Sept. 11, 2001, and amid the periodic blare of the fire department dispatch loud speaker, nearly a dozen individual firefighters and paramedics and a dozen fire and EMS crews were recognized for their heroism in the line of duty.

Many of the awards given out on Thursday stemmed from two major incidents. 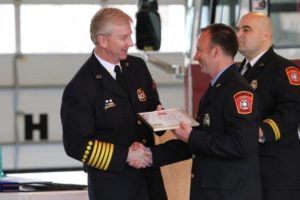 For helping to rescue 12 individuals stranded in flood waters near I-495 and Telegraph Road, Engine 109 firefighters Corey Sherrill and Joaquin Ibarra received the fire department’s Gold Medal of Valor. For helping to rescue 14 individuals over the course of four hours during the flooding, Engine 107 firefighters Fabian Manino, Frank Rachal, Richard Quinn and Timothy Morgan received the Bronze Medal of Valor. Among those rescued by the firefighters were children, senior citizens and a woman who was eight months pregnant.

The other incident happened in Arlington in the early morning hours of June 1, 2011. Around 1:45 a.m., fire crews were dispatched to a house fire on the 5100 block of N. Carlin Springs Road. As firefighters arrived, a man ran out of the burning house and screamed that his wife was trapped on the second floor.

Responding to his pleas for help, firefighters Alexander Dimoff, Jacob Johnson and Battalion Chief S. Doug Insley climbed a ladder to a second story bedroom. Amid heavy smoke, Johnson found a woman lying unconscious on the floor near the bed. The three men were able to lift the woman and hand her off, through the window, into the arms of firefighters Chad Stamps and Mark Jaquays, at the top of the ladder. While still on the ladder, the two firefighters used their medical training to stabilize the patient — who was in respiratory arrest — and then brought her to the ground level where she was transported to a local hospital. 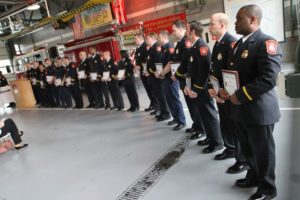 In a speech before the award presentation, County Board member Chris Zimmerman acknowledged that such dramatic incidents are relatively rare in Arlington, and that the firefighters who stand at the ready to risk their lives every day are heroes in their own right.

“You may not have saved a life this week, but you have saved 210,000 people every day from having to worry about it,” Zimmerman said. “And that’s something that’s… a great service to this community. For that, on behalf of the people of Arlington, I thank you.”

More photos, and a full list of the awards and citations issued this year, after the jump.

A black coyote was sighted near Lubber Run this week, and she may have pups. While sighting the shy canine is relatively rare, the dark fur of the Arlington Forest…