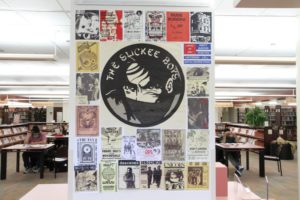 Arlington Central Library is hosting an exhibit of posters and memorabilia from the D.C. area punk rock scene of the 1970s, 80s and 90s.

The exhibit was curated from the personal collection of a library employee who “in true punk fashion… wants to keep a low profile,” according to library spokesman Peter Golkin. The employee, who works in the library materials department, was a “very active participant in the scene at the time.”

“[He] put out some records on his label, designed some of the posters and is friends with some of the more well-known names like the guys in Fugazi,” Golkin said.

In a blog post, Golkin noted that Arlington played a key role in the region’s vibrant punk rock scene.

“Arlington County was a well-known base of operations for many of the musicians and music labels that created a straightforward Mid-Atlantic sound best known through now-legendary bands like Slickee Boys, Minor Threat, Government Issue and later Fugazi,” he wrote.

The exhibit, which is still in the process of being built, is located near the center of the second floor of Arlington Central Library (1015 N. Quincy Street).

Central Library will also be hosting a pair of punk-related events this month. At 7:00 p.m. on April 18, the library will be screening a documentary about Fugazi, called “Instrument — Ten Years with the Band Fugazi.” On April 26 at 7:00 p.m., author Jennifer Egan will be speaking about her Pulitzer Prize-winning novel “A Visit from the Goon Squad,” which recounts the 1970s San Francisco punk scene.