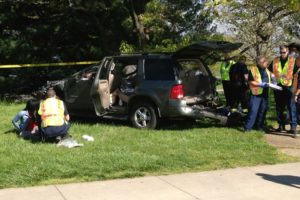 (Updated at 12:15 a.m.) An SUV crashed and rolled over several times while trying to navigate around Memorial Circle during a car chase this afternoon.

The car chase started in Tysons Corner, when Fairfax County began pursuing a vehicle after a reported grand larceny, according to Arlington County Police spokesman Dustin Sternbeck. The chase took pursuing officers onto the George Washington Parkway, into the District and into Arlington National Cemetery, before ending in the wreck on Memorial Circle, according to television news reports.

A large contingent of Arlington fire trucks and medic units were dispatched to the scene of the crash, to treat six people injured in the SUV. A photo posted to Twitter depicts the SUV with severe front-end damage on a grassy area just off the circle.

Among the law enforcement agencies that played a role in the chase were Fairfax County Police, U.S. Park Police and Virginia State Police. Arlington County Police were not involved in the chase and only played a traffic control role following the accident.

Around 4:30 p.m., Metro reported that as a result of the accident, 7Y buses toward Federal Triangle were experiencing delays of 20-25 minutes due traffic on the Memorial Bridge.