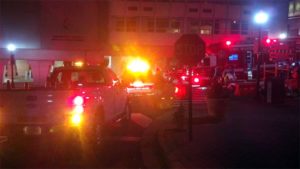 Update at 10:05 p.m. — The bomb squad “disrupted” the package, resulting in a “boom” that could be heard in the area.

N. Nash Street in Rosslyn has been shut down between Wilson Boulevard and the Golds Gym for a suspicious package investigation.

Some sort of suspicious package or device was spotted on the sidewalk, we’re told.

Police, firefighters and the Arlington County bomb squad are on the scene.