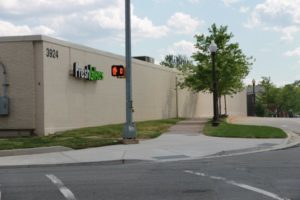 There’s been a lot of work on Wilson Boulevard in Virginia Square for months, but the second phase of a large scale renovation project is nearly complete.

The latest work involved removing a small island on N. Quincy Street and building a curb extension. Wider sidewalks and ADA compliant ramps have also been installed. Tom Hutchings, Project Manager for the Wilson Boulevard Improvement Project, explained that it’s an effort to improve pedestrian safety along a stretch of road typically considered tough to cross.

“That’s what this whole Wilson Boulevard project is about,” Hutchings said. “We’re tightening the street up and making the crossing distance shorter.”

One more curb extension needs to be installed on the opposite side of N. Quincy Street, but the existing improvements to Wilson Boulevard are already being considered successful in making the area safer.

“It has changed pedestrian behavior and we see a higher level of pedestrian activity,” Hutchings said.

The current phase is nearly complete, but there are a few things that need to still go in. The highest priority was finishing essentials like the new curbs, gutters and traffic lights. Things that don’t directly affect safety, such as Quincy Street bus shelters, street lights and trees, were viewed as a lower priority. Those have all been ordered and need to be installed.

“For the public, it’s perfectly functional, but there are elements that need to be finalized,” said Hutchings. “They should all be complete within three months, unless we have to wait until fall with the tree planting.”

This is part of the same project that brought the much awaited traffic lights to the intersection of Wilson Blvd and N. Pollard Street near Gold’s Gym. The work from N. Quincy Street to the area around the Arlington Arts Center builds off of the design of the Virginia Square Sector Plan. Work has been done in phases to coordinate with new development and engineering demands.

The final phase of the project moves down Wilson to N. 10th Street near Mario’s Pizza. Construction on that section will be extensive, so the county is working on setting up a website to give updates on the progress. The website, which is expected to be up and running in the next few weeks, also will list any upcoming traffic disruptions. However, that phase is still in the planning stages, and construction is not slated to begin for about two years.