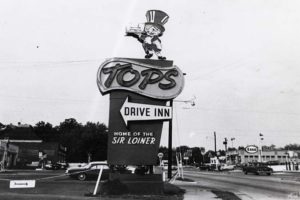 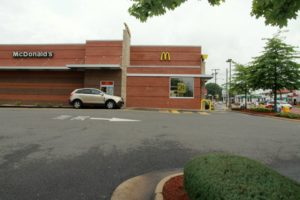 The photo on the left is of Tops Drive Inn at 40 N. Glebe Road, circa 1955. In 1953, James J. Mathews opened this restaurant, the first of what would become an 18 restaurant chain in the D.C. metro area. Tops touted itself as “Home of the Sir Loiner,” which was a double decker hamburger similar to today’s Big Mac.

The original Tops was a 15 seat facility, but really became popular for its “Teletrays” — the drive-in restaurant feature that allowed visitors to order food without leaving the car.

Mathews was friends with Col. Harlan Sanders, who founded Kentucky Fried Chicken. Mathews secured the exclusive franchise rights for serving the Colonel’s recipe chicken in the metro area, and served on KFC’s board after Col. Sanders retired.

In 1967, Mathews merged Tops with Gino’s Hamburgers, a Maryland chain. The Marriott Corporation bought Gino’s in 1972.

The photo on the right is how that location at Glebe Road and Route 50 looks today. It’s still home to a burger joint, but now it’s a McDonald’s.

After the jump: A vintage Tops commercial that ran on WTTG-TV in 1957.