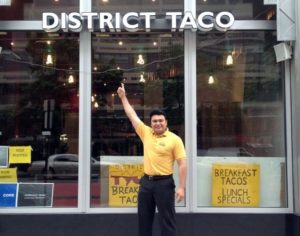 District Taco is planning to open its new brick-and-mortar restaurant in the District tomorrow.

Founder Osiris Hoil tells ARLnow.com that the new location, at 1309 F Street NW near Metro Center, will open to the public on Friday. Hoil, who launched the District Taco cart  in 2009 after being laid off from a construction job, called new restaurant “my American dream” on Twitter.

The D.C. eatery is District Taco’s second location. Hoil opened the original restaurant, at 5723 Lee Highway in Arlington, in November 2010.

Hoil says El Toro — the District Taco cart that parks in various parts of Arlington during the week — will be out of service for a “couple weeks” to allow the company to focus on training staff and getting the new restaurant off the ground.