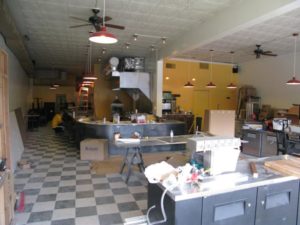 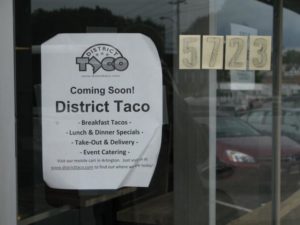 After a number of delays, the big day is finally here. The guys behind the the District Taco cart are holding the grand opening for their first brick-and-mortar restaurant (shown here, still under construction), at 5723 Lee Highway.

The restaurant’s menu consists of basic, fresh Mexican cuisine, served over a counter. There will also be weekly specials, where owner Osiris Hoil will get to show off a bit more of his culinary prowess. See an early preview of the menu here.

In announcing the grand opening on Twitter this morning, Hoil spoke of the journey that has brought him from laid off construction worker to restaurant owner.

Update at 10:00 a.m. — Just in case you needed another excuse to go, District Taco is offering a “buy one burrito, get one taco free” deal.