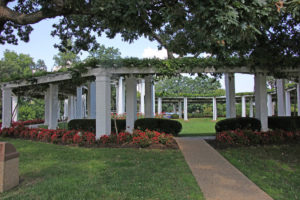 Arlington National Cemetery will play host to a historic event this weekend, celebrating the 150th anniversary of the song Taps.

The anniversary of the National Song of Remembrance will be marked with a ceremony on Saturday, May 19, in the cemetery’s Old Amphitheater. There will be participants from TAPS 150, an organization devised to commemorate the anniversary, along with Bugles Across America, an organization to recruit volunteers for playing Taps at veterans’ funerals.

Hundreds of buglers from around the country will take part in the ceremony, which starts at 10:00 a.m. There will be speakers, special music and a playing of Taps at the event. After that, the buglers will move to sites throughout the cemetery to simultaneously play Taps following the noon chimes.

“Buglers from all over the United States are coming to Arlington National Cemetery to take part in a once-in-a-lifetime experience of sounding Taps in America’s most sacred shrine,” the TAPS 150 website reads. “These are dedicated musicians who believe that a live sounding of Taps is not only appropriate but deserved and even indispensable for those who have served our nation in uniform.”

The website also claims the simultaneous playing should allow people to hear the echo of the tune nearly anywhere in Arlington.

The event is free and open to the public.

Taps was first arranged in July 1862 — during the Civil War — by Union General Daniel Butterfield. Butterfield created the tune to honor his fallen soldiers after the bloody Seven Days Battles near Richmond.