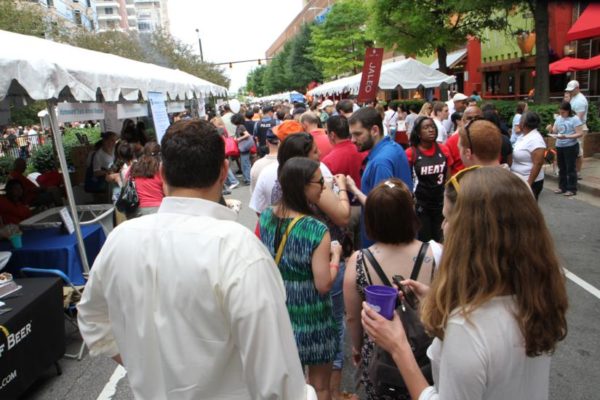 (Updated at 10:55 a.m.) The 25th annual Taste of Arlington was held on Sunday afternoon.

Thousands came out to enjoy the nice weather and to sample a wide variety of appetizers, entrees and desserts from local restaurants. There was also beer and wine for the over-21 set.

As before, the event was held in front of the Ballston Common Mall along Wilson Boulevard. Even though the footprint of the event was expanded up N. Stuart Street and into Welburn Square this year, it was still difficult at times to get around, especially in places where long lines had formed. New Ballston Business Improvement District Executive Director Tina Leone says organizers are working to fix that.

“We have some pretty big plans for next year,” she told ARLnow.com. “We would like to further expand the footprint of the event. Of course we want more people to come every year, but we need to accommodate them. We really want to make next year’s event even easier for people to get there, get tickets, get around, and just enjoy themselves.”

Other plans in the works for next year include more entertainment — perhaps an additional stage — along with an expanded “kid zone” and a new “dog zone” for those who bring their pups to the event.

END_OF_DOCUMENT_TOKEN_TO_BE_REPLACED

More Stories
Click It or Ticket: ACPD To Step Up Traffic EnforcementFestival-Goers Consume 110 Pounds of Testicles