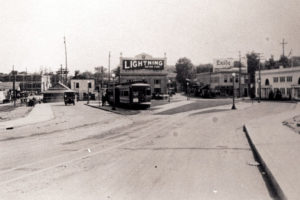 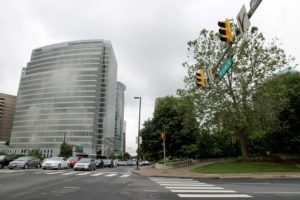 The picture on the left is the area formerly known as Rosslyn Circle, taken around 1925. Records indicate the businesses shown were on Agnew Avenue, which is now Lynn Street. They stood at the base of the newly finished Key Bridge, which replaced the Aqueduct Bridge in 1923.

Rosslyn, and this section in particular, used to be considered a rough area. After the Civil War ended, many soldiers stayed behind. They drove out the farmers who previously owned the land in Rosslyn, and set up saloons, gambling houses and houses of prostitution. Thievery and murder were a regular occurrence, and locals knew not to walk there at night, if at all.

By the early 1900s, fed up residents wanted to rejuvenate the area and formed groups such as the “Anti-Saloon League.” They worked to change Rosslyn’s colloquial slogan from “Gateway to Perdition” to “Gateway to Virginia.” It took decades to drive out the unsavory elements.

By the 1950s, big plans were in the works to fully transform Rosslyn Circle and the surrounding area from a slummy, dangerous part of town teeming with pawnbrokers into a business hub sporting high rises. Much of the area was razed, both to accommodate the new buildings, and to make way for the completion of Interstate 66.

By about 1963, nearly all of old Rosslyn was gone, and businesses and industry poured into the area. Adding to the renewal was the promise of a Metro station, which was completed in 1977.

The photo on the right shows what the area near the old Rosslyn Circle looks like today.