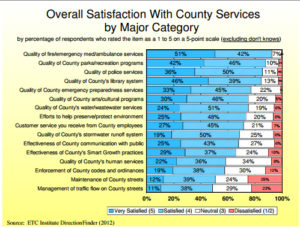 Arlington residents are not only happy with the county government’s services, they’re more satisfied than before, according to a new study commissioned by the county.

This is the third time Arlington has done a Resident Satisfaction Survey; the first took place in 2004, with another in 2008. The county uses the results to target areas for improvement, and to figure out the public resources residents find most beneficial.

Some areas for improvement were also identified by the survey. By a wide margin, maintenance of county streets and management of traffic flow were identified by respondents as areas that are “most important for the County to improve.”

Other trouble areas where the county hopes to improve include quality of human services, management of smart growth practices, preserving affordable housing, preserving nature areas and enforcing traffic laws. There was also a lower satisfaction rating this year for the hours of library operation, which county staff hopes will be solved by an already-funded increase in library hours starting in July.

When compared against other communities of similar size Arlington came out 32 percentage points above the national average for satisfaction with county services.

“I’m pleased with the results of the survey. It shows we are clearly moving in the right direction — and that we need to continue to invest in our streets and infrastructure,” County Manager Barbara Donnellan said in a statement. “Having objective data from the community on where we are doing well and where we need to improve is critical to our work.”

The survey was conducted in April by ETC Institute, and information was gathered via phone, internet and mail. More than 1,300 households participated. Full results are available online.