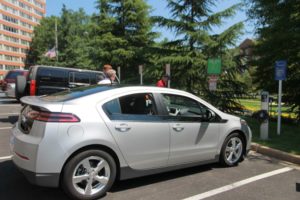 As summer travel season ramps up, a lot of money will be put toward filling up the car with gas. But a new report claims the average Virginia family could save $560 at the pump this summer by using more fuel efficient cars.

Organization representatives presented the findings today at a press conference at the River House Apartments (1400 S. Joyce Street) in Pentagon City. There, they highlighted the electric car charging station in the parking lot, and urged Arlington residents to consider purchasing an electric car.

The report claims that the improved standards would save the equivalent amount of pollution as taking three coal power plants offline for the summer, on top of the $560 each Virginia family would save.

“Not only could you take that trip to Virginia Beach while burning much less oil along the way, but you could book the family a hotel for a couple of extra days with the money you’re saving,” said John Cross, Federal Transportation Advocate for Environment Virginia.

“From an economic, environmental and national security perspective, we must reduce our dependency on oil,” said Moran in a statement. “This new report from Environment America highlights the importance of moving forward with cleaner, more fuel efficient cars.”

Cross noted that buying an electric car now has a positive environmental impact, even though the standards aren’t yet to the 54.5 mpg mark.

“Drivers do not have to wait until 2025 to reap the benefits of cleaner cars,” Cross said. “A bumper crop of fuel efficient cars have already started coming to the showroom floor.